On February 28th. 1405 Glyn Dŵr made a treaty with Edmund Mortimer (Owain Glyn Dŵr’s son-in-law) and Henry Percy, Earl of Northumberland, which was signed in the home of the archdeacon of Bangor. Under the treaty England and Wales would be divided into three parts. Percy would rule twelve named counties stretching from the Scottish border deep into the midlands and East Anglia; Mortimer was to rule the rest of England, except for the part now claimed by Owain. Glyn Dŵr would rule “…from the Severn estuary as the River Severn flows from the sea as far as the northern gate of the city of Worcester; from that gate directly to the ash trees known in the Cambrian or Welsh language as Onennau Meigion which grow on the high road leading from Bridgnorth to Kinver; then directly along the highway, popularly known as the old or ancient road, to the head or source of the River Trent; thence to the head or source of the river commonly known as Mersey and so along that river to the sea.”. The inclusion of the whole of Cheshire, and a substantial part of Shropshire, Herefordshire and Worcestershire in Owain’s share is some measure of his standing at this stage. He was bolstered by French support, and having his son-in-law Edmund Mortimer by his side gave him substantial bargaining power.

The first half of Henry 1V’s reign was a period of great turmoil. His claim to the English throne was very questionable and Mortimer’s nephew had a more legitimate claim to the English crown.  All three signatories were ambitious men. Support from France up to this period gave them further cause to be sanguine about their future prospects (despite the devastating defeat of the Percies at Shrewsbury in 1403). 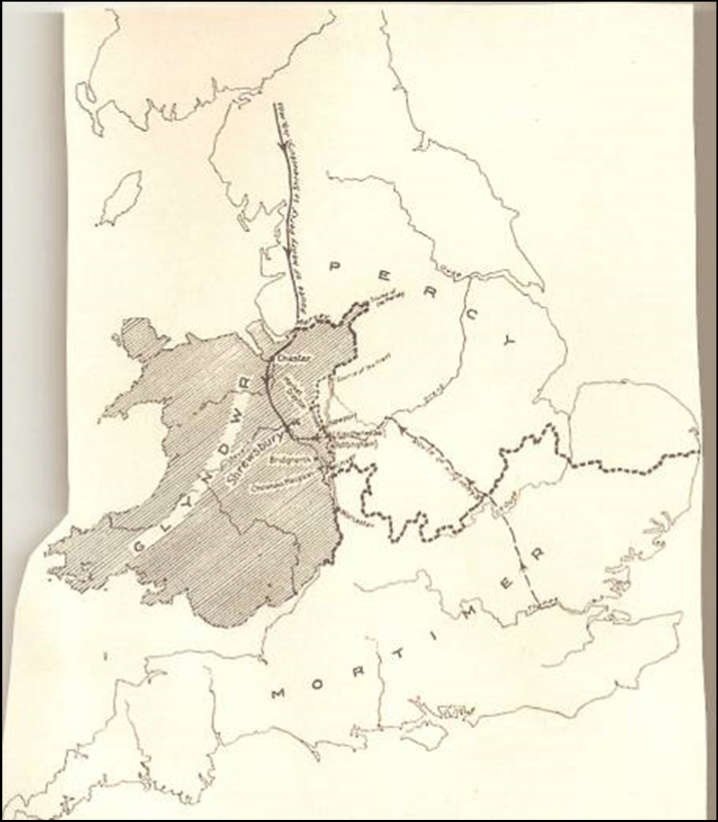