Owain Glyn Dŵr held the lordships of Glyndyfrdwy and Cynllaith on either side of the Berwyn Range in north Wales. The manorial centre and main home was at Sycharth in the parish of Llansilin.

Sycharth is a fine example of a motte and bailey - an earthwork castle with timber defences. Nothing is known of its history until the late 14th Century when Sycharth achieved lasting fame as home of the Welsh prince Owain Glyn Dŵr, leader of the last great Welsh rebellion against English rule. Although nothing remains above ground of the original house it is now scheduled as a monument of national importance.

His second home was set at a moated mound, surrounded by parkland at Carrog (about 3 miles east of Corwen). Owain also inherited some fertile land from the estate of Rhys ap Tewdwr in South Wales. Glyn Dŵr’s forces captured Harlech Castle in 1404 and held it until 1408. During this period Owain made Harlech Castle the home of his court and family. Local tradition claims that he spent his last years in the home of his daughter, Alys, at Kentchurch Court in the Golden Valley in Herefordshire.

Sycharth lies near the village of Llansilin, less than a mile from the present English border, and some 7 miles west of Oswestry. It was once home to Owain, Margaret his wife, and their many children - at least six sons and five daughters.

Excavations were undertaken at the site in 1962-3, which revealed the remains of two timber halls on the top of the mound. One of these buildings was substantial and about 13m (43ft) long.  Charred wood remains at the site confirmed the burning of the building by the army of Prince Henry (later Henry V) in 1403. None of the buildings survived the predations of warriors and robbers. Spencer Smith, a freelance archaeologist, believes he has discovered parts of the building destroyed in 1403 and is keen to undertake further studies of the site.

In Owain’s time Sycharth was a very impressive house, which was the envy of his contemporaries.  The best account of the moated manor house we have is in the ode composed by Iolo Goch.  He describes a building with a tiled roof and free-drawing chimney. It boasted the resources required to sustain a large household and included an orchard, stone dovecote, rabbit warren, fishpond, heronry, mill and deer park.

To visit Sycharth, take the B4580 from Oswestry to Llansilin (about 7 miles). Continue along the B4580 through the centre of the village and continue south at the crossing about half a mile from the village.  Continue for about a mile and turn left at the crossing. This road crosses a bridge and Sycharth will be found about two hundred yards beyond the bridge on your left. Look for the small car park which gives you access to the footpath which leads to the site. You should find an interpretation board here giving a brief history of the site. Access is by kind permission of Sir Watkin Williams Wynn. 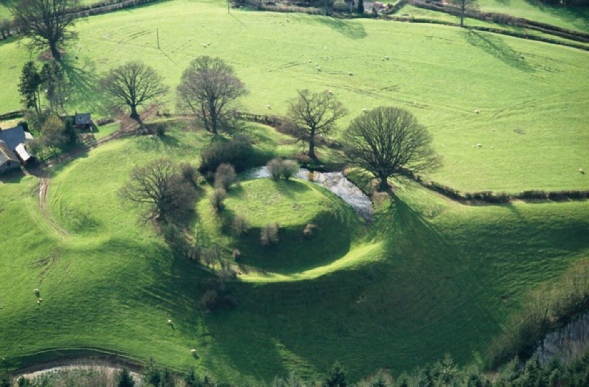 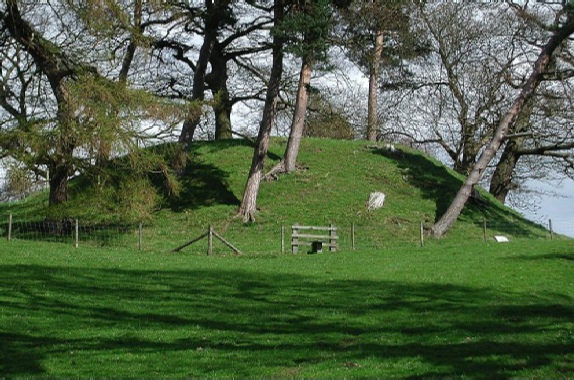 Sycharth   The motte, moat, bailey and ponds are clearly seen 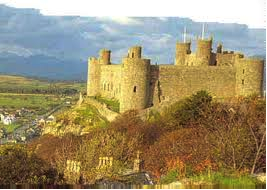 Harlech Castle (left) was captured by Owain early in the summer of 1404.  He had captured Aberystwyth Castle earlier.  Harlech was particularly strong, so Owain decided to establish his court there.  By 1404-05 Owain had established effective control of almost all of Wales.